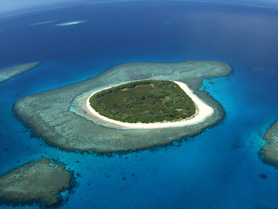 Courtesy of National Geographic
As the third largest archipelago in the South Pacific Ocean and part of the Melanesia subregion, New Caledonia is located just above the Tropic of Capricorn, about 1,500 km east off the coast of Australia, and 1,700 km west of New Zealand. New Caledonia consists of six islands, which include Grande Terre, the Loyalty Islands, the Chesterfield Islands, the Belep archipelago, the Isle of Pines and a few remote islets. Grande Terre, also known as Le Caillou, is the main island of New Caledonia. Separated by mountain ranges, Grande Terre is divided into two coasts, the West Coast and the East Coast, both with distinct characteristics. While the East Coast is the exotic paradise with valleys, waterfalls, and lush vegetation such as luxuriant forests, the West Coast is the vast plains for livestock farming and the home to miles of fabulous white sandy beaches and waters with fish, as well as tropical dry forests. Mangroves, a unique ecosystem, also flourish and dominate the coastline. The climate of New Caledonia is characterized as moderate tropical oceanic. Modified by southeast trade winds, weather stays hot and humid. The hot and rainy season dominates from November to March. Tropical depressions and cyclones occur most frequently during the rainy season. Due to the influence of landscapes, precipitation differs greatly within the island. Rainfall is more abundant in the East Coast than the West Coast. The average annual temperature is about 23°C. The hot, humid climate and variation of rain patterns contribute to different ecosystems, for example, lush vegetation, savannahs, plains, mangroves, lagoons, and dry forests.
Powered by